My first year as President has been to say the least, eventful.

Rugby across all teams in the club has been strong and it has been encouraging to see more girls starting to play. After a sticky start the ladies team played well winning the BT National Womens’ Plate at Murrayfield and finishing 3rd in the League . The men had an exceptionally good run, playing for each other and finishing at the top of the league, when Covid-19 stopped play and teams with games in hand did not get a chance to play them. Although disappointing for the team, the SRU decision to nullify the season was probably the correct one.

This spring we lost Adam Gray a past player, captain, coach and SRU representative who did an enormous amount for the club. Only yesterday we heard of the death of Sandy Louden who was captain of the resurrected Stewartry team in the 71-72 and 72-73 seasons.

Away from rugby, the gym has been doing well bringing more members to the club.

I would like to thank members and sponsors for their support over the past year and hope we can get back to some sort of normality soon.

Today as I write this statement for our AGM on 29th June, we should all have been enjoying our weekend of celebrations for our 50th anniversary. A good few beers are now being stored up for the delayed celebration at the same time next year.

A working group is endeavouring to refresh our club development plan, which includes already funded lighting on our second team pitch allowing mid-week, evening games to be played giving more flexibility which will keep older players passing down their experience to young players coming up and in the process improving the transition of youth players into senior rugby.

As a club our surrounding community is at our heart and keeping fit at the gym in a sociable atmosphere will enhance the wellbeing of our community. The social side of the club has in the past year been particularly strong with many excellent nights in the clubhouse.

We thank the Galloway News for giving us space to articulate club activity.

The future at this stage looks uncertain, but as lockdown becomes more relaxed there will be opportunities for us to begin training and keeping fit in the hope we can follow New Zealand who are this weekend playing rugby to a crowd of 20,000.

At this point I ask you to get out a bottle of beer or whatever your preferred tipple is and drink a toast to Stewartry and a resumption of the enjoyment we all have at our Rugby Club. 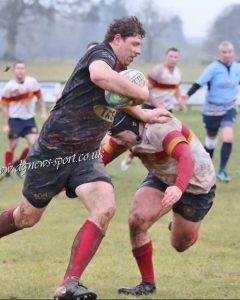 Season 2019/20 was Stewartry rugby club’s 50th anniversary and it’s been an absolute pleasure to captain the side throughout the year.
Overall it’s been an incredibly successful season, both on and off the field, but unfortunately due to Covid 19 the season ended prematurely.

The season finished with ourselves top of the table, and the title race looked it was going to go right down to the wire with both Allan Glens and Garnock looking to hunt us down.
We had a few stand out performances throughout the year, but my highlights were;
• An away victory against Kilmarnock which was the first time in our history a Stewartry side has defeated Killie away from home
• A 14-0 win against Allan Glens which was a first home win against them in 9 years- a victory that was all the more impressive considering the two heavy defeats we had suffered at their hands earlier in the year
• A narrow home win over Garnock, our first against them for 14 years
• And the 3 victories against Annan, two of which were away from home
This was my 6th season playing for the 1st XV and prior to this season I’d never been in a winning team against Annan, so to do it thrice in a season was special

In total we played 21 games; with Danny Boyd and myself playing all 21. And vice captains TJ McCarney and David Maxwell closely behind playing 20. We won 17 games and lost 4, using a total of 44 players.
Craig Mosey was our top point scorer with 90 points and Scott Milligan was our top try scorer with 6 tries
We went undefeated from the middle of November winning our final 9 games

For me the two things that improved the most this season were the team spirit and the social side. These two massively improved things on the pitch and there’s no doubt we won games purely because of the togetherness of the boys .
I’d like to take this opportunity to thank all supporters. It’s really been brilliant to see the clubhouse full after every home game. I’d also like to thank coaches Sandy Currie and Davie Borland for all the time they’ve put in this season. The boys really do appreciate it .

Looking forward to next season we should be full of optimism. Having beaten every team in our league at least once we should be aiming for another strong showing. A trip to Murrayfield would be nice…?

Finally I’d like to thank the boys for all the effort they’ve put in this year. It’s been brilliant. I’ve been told the memories you make playing rugby will be some of the best in our lives and I look forward to making many more with such a great bunch of lads. 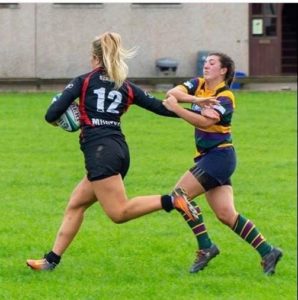 It’s been a great year for the Sirens, winning the BT National Womens’ Plate at Murrayfield for the 3rd time, and finishing 3rd in the league. The team were frustrated when the decision was made that we would no longer play in the womens’ premiership. We met at the start of the season and decided that we weren’t going to let this decision ruin our season and that instead we would use it to go out and show how good a team the Sirens were. The Sirens scored a total of 514 points throughout the season which is the highest amount of points scored in the league. The Sirens finished 3rd in the league overall. It was decided at the start of the season that as a team we wanted to make playing at Greenlaw something special for us and the club. The team decided that we were going to try and be unbeaten at home throughout the league. We achieved this goal by winning every game at home apart from a 7-7 draw to league winners Heriots. The senior men’s team also did well in helping us make Greenlaw somewhere that teams didn’t want to play by only losing 1 of their home fixtures. The team have received some fantastic home support over the season, as well as some faithful travelling support to most of the away games. The support is always appreciated.

In January our cup run started with Hillhead at home. Hills came away with the win that day but it was a game that the whole team should be proud of. The cup run then continued with a win against Heriots away and then a win against old rivals Ayr at home. The cup run was finished by a loss to Corstorphine Cougars away but again a performance for the team to be proud of.

Away from the rugby field the team have also been busy with pregnancy announcements and engagements because if you haven’t heard Chloe is engaged.

Two of the sirens Lisa Ritchie and Lizzie Ballentine also represented the British Womens’ Police team in Hong Kong at the Police World championships, playing against teams from New Zealand and Australia. Lizzie travels over from Ireland most weekends just to pull on the Stewartry shirt. It means a huge amount to the team the Lizzie is willing to dedicate so much time just to play for the Sirens and we would all like to say a massive thank you for your commitment to the team. Not sure if we would all get out our bed as early as you for a game of rugby.

The team only suffered a couple of injuries this year. However if you ask Lisa Ritchie or Lauren Gunn we were lucky to make the season with the drama over injuries they have had. One red card this season saw the ref card Jenny Yates for what he thought was an overreaction to a knee in the back after a late tackle. The team weren’t upset at Jenny for getting carded but for going inside to the warm changing rooms for a shower instead of carrying the water bottles on for the rest of us.

The team have enjoyed social events and I can honestly say that I think relations between the womens’ team and the mens’ team are at all time high after a couple of nights out together. The team have got a great positive vibe about them and perhaps have even shared a bit too much details about themselves or at least Ali Henderson has.

A few of the sirens have also been helping out when they can with the girls section where there is some great young talent coming through. We have seen that first hand from youngster Holly Murdoch stepping straight into the womens’ game with no problem at all. She even challenges Ali Henderson for the darkest fake tan. A few of the girls also ran a girls only camp which was a great success and we hope to able to run an event similar again.

None of the season would have been possible without the help of our coaching team Dav Thomson, Ally McMorrin and Gordon Thompson. Not sure anyone else would put up with the moaning about being cold or having to do hill sprints which seem to be Coach Davs favourite form of punishment. Thank you also goes out to our sponsors for their continued support.

We look forward to getting back to rugby once the current covid 19 situation has passed but until then the Sirens hope everyone stays safe at home.